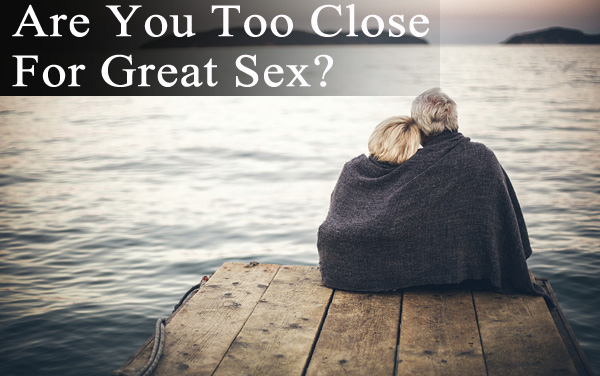 Is your partner your best friend?

It’s ironic: the couples who have the closest, soul-mate connection and the best relationships often have the worst sex lives. Why? Because the same wonderful intimacy that makes us yearn to merge as ‘one’, obliterates desire.

Here’s how to keep the intimacy but rescue the sex!

Almost anyone who’s ever been in love senses the point when the relationship subtly but significantly shifts from you both being lovers, to being a couple in love.

Lust morphs into romance, torrid kissing gets replaced by intense eye-gazing, greedily devouring each other’s bodies with your eyes turns into examining each other’s faces.

Your heart might soar when you reach the level of intimacy that you hear your partner describe you as their best friend, but it can be the kiss of death for your sex life.

Despite films like My Best Friend’s Wedding, most of us really don’t want to make love to our friends. It would feel incestuous, like having sex with a sibling, not to mention highly embarrassing.

Genuine closeness is a turn off erotically

Morin and others (also watch Esther Perel’s Ted Talk) are at the forefront of exploring why closeness destroys rather than enhances sex (which we’ve always assumed).

The reason appears to be this simple: we find ‘separateness’ far more attractive.

We need to see our partners as individuals, people who are their own person rather than one-half of ourselves, in order to fancy them.

Become ‘emotionally fused’, to the point where you lose your sense of where you finish and they start, and you don’t just lose your identity, you lose interest.

Familiarity and comfort are welcome bedfellows for relationships but they’re lethal for your love life.

Healthier, is what’s called ‘differentiation’: you’re emotionally connected but you accept you’re two separate people who don’t have to agree on everything, do everything together or like the same things.

A crucial ingredient to having good long-term sex is novelty: if you’ve become matching bookends with the same tastes and views, that’s hard to achieve.

If you think the same, you’ll both come up with the same ideas and dismiss ones that don’t appeal instantly, knowing your partner won’t be attracted either.

Differentiated couples embrace their differences and push each other out of their comfort zones, challenging their partner to try new things and see things from a different point of view.

You have to take risks to keep lust alive

The other paradox is the more you value your relationship, the more difficult it is to sustain passion.

If you have everything to lose, you’re far less likely to take risks – like reveal that dodgy turn on that does it for you every time! The reason why ‘first time’ sex is such a turn on is because it’s unfamiliar to us.

Unfamiliarity makes us both anxious and excited – and the resulting euphoria is addictive!

Ever had to make a speech where you’re nearly throwing up beforehand but have to be dragged away from the microphone once you’ve been up there ten minutes?

We need to let our partners see what’s really going on inside those murky depths.

Now I don’t know about you, but there’s some pretty kinky stuff in my murky depths, so I’m presuming there’s some in yours as well. Instead of shying away from this side of ourselves, the secret appears to be to welcome it. Reveal that naughty side. The not so lady-like or hugely politically incorrect you.

Sides of you, even you find uncomfortable.

This works wonders for your sex life (it feels risky, edgy, dangerous – all of which make us feel aroused).

Having the guts to be yourselves and ask for things knowing you won’t be judged is the key to fantastic long-term sex.

But I’m not telling you to stop being friend just to remember that friendship might by lovely but so is sex.