Skip to content
Jan 18,2019 Comments Off on History of Strap On Sex bell, lover, massage, off, Strap On Sex, women 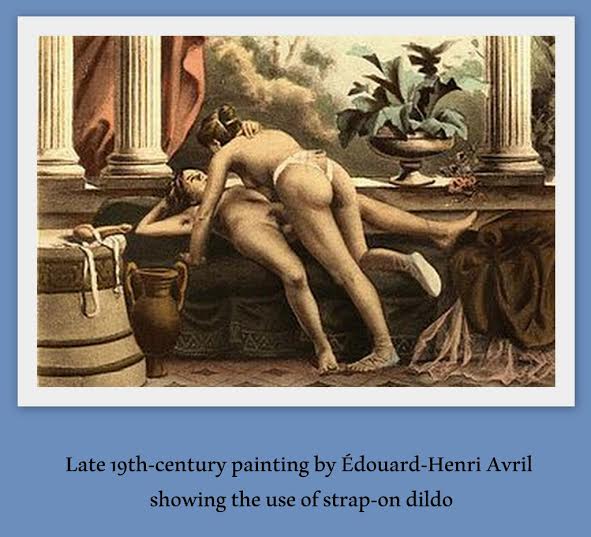 2. The oldest known relic that’s believed to be a strap-on is from the Upper Paleolithic Period; c10,000 bc.

4.Ancient Egyptian mythology also gives a glimpse of strap-on pleasure with their belief that the ebb of flow of the Nile River was caused by Atum’s (the god of creation) ejaculation. This sparked the ritualistic ejaculation of Pharaoh into the Nile River. The strength of the rain was thought to correlate to the strength of the pharaoh’s ejaculation. It’s believed that to ensure an abundance of rain, the pharaoh’s wife would massage his prostate with a phallus while he sat on her lap and masturbated.

It’s believed that most ancient Greeks and Romans regarded women who took upon themselves the role of penetrating as having oversized clitorises to please their lover with. Roman mythology is also full of gender bending tales. Such as Hermaphroditus the son of Hermes (Roman Mercury) and Aphrodite (Venus) which is described as being both male and female. Also, Macrobius describes a masculine form of “Venus” (Aphrodite) who has a beard and male genitals, but wore women’s clothing. Belief in this mythology survived through Greek and Roman cultures as seen is sculptures of Aphroditos, a female figure who pulls up her woman’s clothing to reveal male gentiles.

7. Hibreas, a Roman Orator, is thought to have once said of Tribades, ‘I first examined the male to know if it was natural or stitched on’. Likewise, Marcus Valerius Martialis, a Latin poet, portrays Flinene Pedica as a Tribate who sodomizes the boys more heated than a husband and ‘fucks eleven girls or Boys in a single day’.

“Therefore, if even men like you, Callicratidas, can find satisfaction in women, let us males fence ourselves off from each other; but, if males find intercourse with males acceptable, henceforth let women too love each other. Come now, epoch of the future, legislator of strange pleasures, devise fresh paths for male lusts, but bestow the same privilege upon women, and let them have intercourse with each other just as men do. Let them strap to themselves cunningly contrived instruments of lechery, those mysterious monstrosities devoid of seed, and let woman lie with woman as does a man. Let wanton tribadism — that word seldom heard, which I feel ashamed even to utter — freely parade itself, and let our women’s chambers emulate Philaenis, disgracing themselves with Sapphic amours.

And how much better that a woman should invade the provinces of male wantonness than that the nobility of the male sex should become effeminate and the male play the part of a woman, as a woman can strap to themself these instruments and do a male as a male!”

If that isn’t enough to paint a picture of what strap-on sex might have looked like in ancient times, we find even more examples. Such as in the writings of Hipponax, a 5th century Greek poet who describes a female using a strap-on on a Greek male. Also a tale vivid tale of strap-on sex is found papyrus which was recycled to wrap a mummy was recovered at Oxrhynchus in Egypt.

In Lydian tone she said, “Come hither, I will plug up your tight asshole.” And she beat my egg sack with a sprig of lilac as if I were a satyr. I fell backwards, breathing heavy…”

8. A very similar passage occurs in the Satyricon of Petronius, which describes the sexual pleasures of the Emperor Nero Oenothea brought out a leathern dildo which, when she had smeared it with oil, ground pepper, and pounded nettle seed, she commenced to force, little by little, up my anus. The merciless old virago then anointed the insides of my thighs with the same decoction; finally mixing nasturtium juice with elixir of southern wood, she gave my penis a bath and, picking up a bunch of green nettles, she commenced to strike me gently all over my penis and belly below the navel.

A tale of female dominance is found within the ancient writing of Inanna and Ebih. Not only is a story of the goddess dominating Elbih recorded, but there are also descriptions of elaborate cross dressing transformation rituals.

9. It’s also found that strap-ons were seen in ancient Greek Theater where male only casts would wear gigantic phallus attached to their waists in satyr-plays.